Giselle Lopez was barely bigger than an adult’s palm when she was born in early October. A micro preemie, Giselle arrived at just 26 weeks, weighing 1 pound, 8 ounces, and this led to some serious health concerns. She was placed in an incubator to keep her warm, while breathing and feeding tubes helped her with necessary life functions, and special IVs provided her with nutrition. Doctors also performed special screening tests to ensure that her brain and eyes were developing.

Eight weeks later, Giselle had gained almost 4 pounds and was learning to eat on her own. Her mother breathed a sigh of relief. Pre-term babies aren’t rare — about 1 in 10 births in the United States are premature. Colorado’s rate is slightly lower (8.9%), but the state is tied for the 10th highest rate in the U.S. for low-birth-weight babies (9.0%), and babies with a low birth weight typically require specialized medical care. Yet, very few, if any, soon-to-be parents think about the potential need for neonatal care (specialized care for newborns who are ill or born too early) before giving birth. “People don’t go into pregnancy thinking they’re going to need a neonatal intensive care unit [NICU]. You don’t research neonatologists,” says Ann Ryan, MD, a Permanente neonatologist, Kaiser Permanente Colorado regional chief for neonatology, and the medical director of the NICU at Denver’s SCL Health Saint Joseph Hospital. More than 500 of the tiniest patients come through that NICU and the SCL Health Good Samaritan NICU in Lafayette—where Dr. Ryan is also on staff—each year.

While a NICU is rarely part of a birth plan, knowing what services are available where you’re giving birth, should something go wrong, can help put parents at ease. Dr. Ryan, a 5280 Top Doctor with 14 years of experience, all with Kaiser Permanente, walks us through what sets NICUs apart, providing valuable insights on what parents-to-be should look for when choosing where to give birth.

Giselle was born at another hospital but was an emergency transfer to the SCL Health Saint Joseph Hospital NICU. Kaiser Permanente patients there benefit from the health provider’s integrated delivery care model because all Kaiser Permanente doctors who might participate in an infant’s care can communicate with each other and coordinate treatment via the newborn’s electronic health record. For instance, it is much easier for the neonatal team to communicate with obstetricians and maternal fetal medicine doctors well before the baby is born. This communication continues as the baby receives care from many specialists in the hospital, and then follows the infant after being released from the hospital, easing the transition of care from medical specialists to the baby’s new pediatrician.

Kaiser Permanente Colorado has also earned some of the state’s top rankings when it comes to sick infant care. Take necrotizing enterocolitis, for example. It is a serious bacterial infection in premature infants that can cause infections, inflammation, and potentially destroy the wall of the intestine. Nationally, it occurs at a rate of about 4 percent. Knowing that breast milk and probiotics can protect infants from this infection, Kaiser Permanente Colorado neonatologists feed their smallest babies this combination using breast milk from the mom or free donor breast milk. As a result, Kaiser Permanente Colorado neonatologists have reduced the incidence of necrotizing enterocolitis to less than half of a percent—more than 75 percent lower than the national average.

In order to ensure that as many Colorado babies as possible receive the best care available, the Kaiser Permanente Colorado neonatology team also works with neonatology teams in hospitals across the state that belong to the Vermont Oxford Network (VON) — a group of neonatal health care providers from roughly 1,000 NICUs across the country and around the world that exchange knowledge, learnings, and best practices. The Kaiser Permanente team has helped these NICUs implement the same program to reduce necrotizing enterocolitis, and as a result, close to 65% of the state’s very low-birth-weight infants treated in VON hospitals receive the same combination of probiotics and breast milk, compared with only 15% of those in NICUs nationally.

Nurseries staffed by Kaiser Permanente Colorado neonatologists have also decreased their use of antibiotics in these fragile newborns by 80 percent. In some NICUs, antibiotics are given to premature infants as standard practice, even when the infants display no symptoms of infection or illness. Recent research indicates that this practice could interfere with the development of the baby’s microbiome — their natural microbial system — and cause other health problems later in life.

But good care is about more than just data and research. It’s also about the human touch. Dr. Ryan and her team prioritize parents’ involvement in treatment plans. “We pride ourselves on providing family-centered care,” she says. “We try to emphasize things that parents can do.” It’s all part of the family-integrated care approach at Kaiser Permanente Colorado, which aims to involve loved ones more directly in the care of their children. One way that happens is by training family members on how to work alongside doctors to help with treatment. For example, parents may learn to operate feeding pumps. 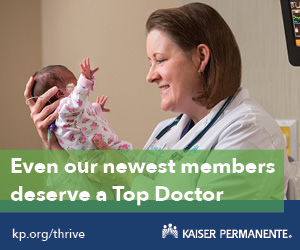 It’s also about helping parents and babies bond. Often, babies need to stay in their incubators to avoid infection, but even if they can’t hold their child, parents can read to their little ones or perform infant massages. Kaiser Permanente’s NICU at SCL Health Saint Joseph Hospital has private rooms that allow parents to stay in the same room with their babies, and parents at SCL Health Good Samaritan Medical Center often get to stay in a nearby patient room so they can be present around the clock if they choose to, as well. “It’s a very flexible environment,” Dr. Ryan says.

Before implementing this effort, parents often “didn’t get hands-on experience until their baby was close to going home,” Dr. Ryan says. Now, “even when the baby is small and sick, the parents are right there with us,” she says. “It makes them feel more like parents, not spectators. This is their child, and they really need to be part of what we do.”

Outside the hospital, other aids exist for worried parents. A support group of parents whose children were once patients in NICUs led by Kaiser Permanente neonatologists — or “graduate parents,” as Dr. Ryan refers to them — acts as a resource for parents in the midst of what can be a very uncertain and scary time. And Kaiser Permanente Colorado’s unique perinatal home care system sends a practitioner to the family’s house a couple of days after discharge for a follow-up visit to ensure that mom, baby, and family are thriving.

While all of these considerations can be overwhelming, and you probably never want to have to meet Dr. Ryan (don’t worry, she won’t take offense), she has a reminder for parents whose babies need a little unexpected help getting started: “Babies are amazingly resilient. Babies are strong. They can overcome things that, as adults, we would have a very hard time with,” she says. “It’s amazing what they can come through and recover from.”

Like baby Giselle, who as of mid-December has been growing stronger every day in the comfort of her home.